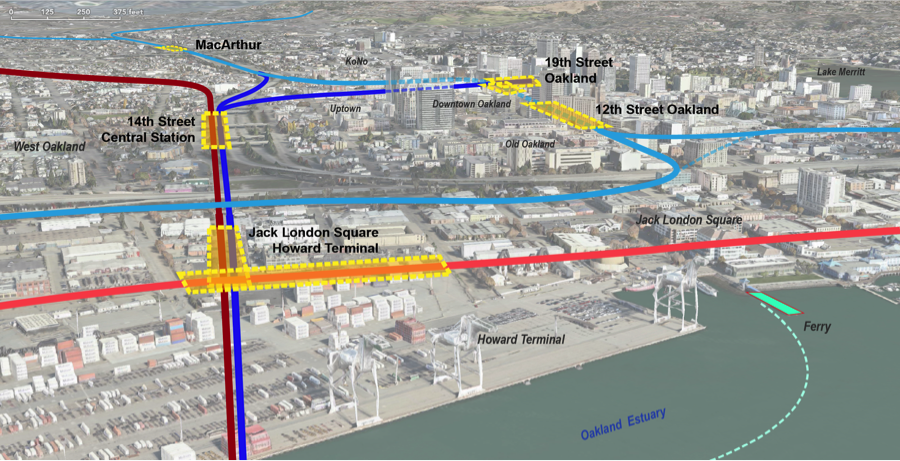 We take many large systems for granted. However, the infrastructure and institutions we use today were not built as a finished product. Rather, they were slowly built over decades phase by phase.

Examples of phasing are all around us. The University of California system started with one campus in 1868. By 1955 it had six campuses, and now in 2017 it has 10. The Interstate Highway System, airports, and telecommunications networks have been built and expanded over generations.  It does not usually make sense to plan and build a complicated and large piece of infrastructure at once.

Earlier blog posts highlighted how the ConnectOAKLAND vision would benefit Oakland and how it would better connect the Bay Area to Downtown Oakland. Today we examine how this complex idea can be built through careful phase design and by prioritizing moving people ahead of moving automobiles.

There are a few simple reasons to build the project in phases:

ConnectOAKLAND believes the following steps are the best way to turn our vision into a reality. Although complicated, we hope this vision will seem just as obvious to future Bay Area residents as the Bay Bridge looks to us today. This is just one approach to achieve the vision. We recognize that there may be other approaches, and we look forward to achieving the best solution possible. 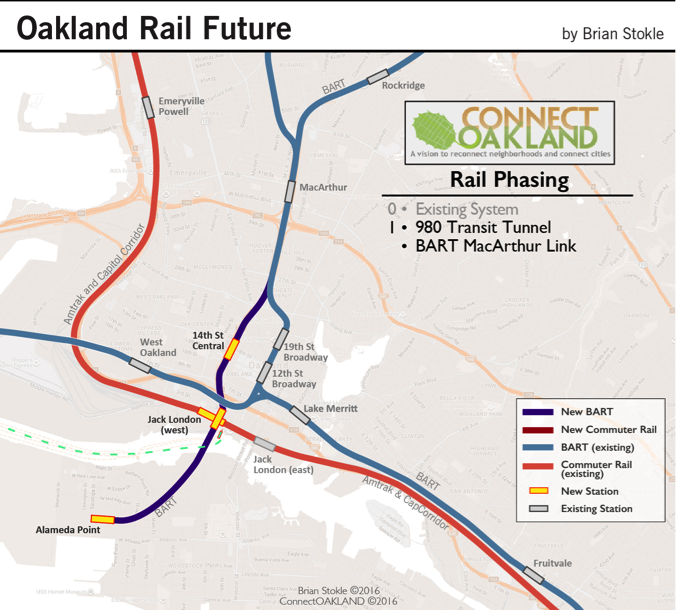 Building the 980 Transit Tunnel to Jack London or Alameda offers BART service to these places lacking regional access. This will provide benefits while the region decides where to put the 2nd Transbay Crossing and how to connect it in San Francisco.

Building the transit tunnel and reaching Alameda immediately works as a stand-alone early phase with the following benefits:

The completion of the first phase would allow the first new BART line in decades – a shuttle that we call Purple Line. The Purple Line would run from either Concord or Richmond to Alameda stopping at the three new stations: 14th St Central Station, Jack London, and Alameda Point.

A commuter from Walnut Creek could get to work in Downtown Oakland on the Purple line to 14th St Station. The new line would help more than just downtown workers: a university student in Alameda could take the train to Downtown Berkeley to reach the University, and Rockridge residents could go to an A’s ballgame at the potential Howard Terminal stadium by exiting at Jack London Station. Similar benefits would also come from a Richmond to Alameda line.

The ferry could also play a bigger role for East Bay commuters by connecting passengers arriving on BART at Jack London Station via BART directly to the Ferry Building in San Francisco.

Linking the East Bay with San Francisco is a critical piece of the Connect Oakland 980 vision.

How to build it

There is no current agreement on the best way to build the five mile second transbay crossing. We could build the crossing as a bored tunnel, an immersed tube (like the current BART tube), or as a transit bridge. Whatever the design, the construction should connect Downtown Oakland to Downtown San Francisco. We could build the crossing with two BART tracks, but a hybrid BART/Caltrain design would be more useful for the Bay Area. 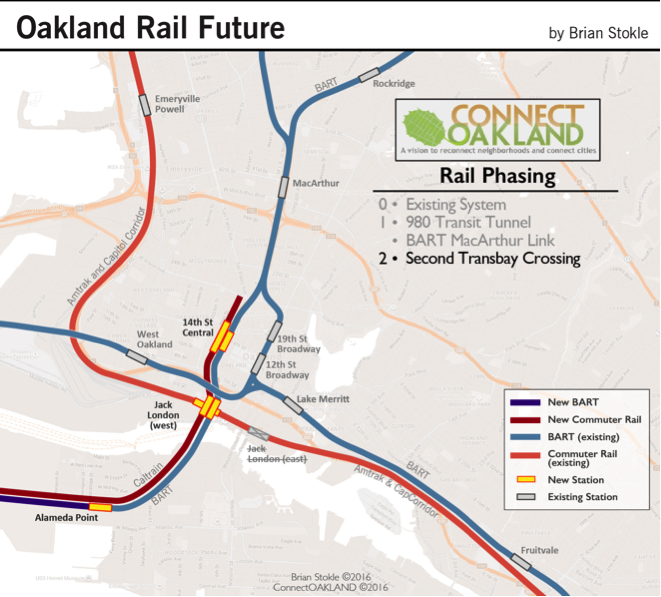 How to built it

A two-mile tunnel would be built under San Pablo Avenue connecting the I-980 Transit Tunnel under Brush Street to the existing rail tracks in Emeryville, just south of Powell Street. The tunnel could be built with minimal disruption to San Pablo Avenue if it was bored through the ground. The East Bay Bridge Shopping Center could be redeveloped with a new transit station and more housing, offices and retail.

Capitol Corridor and San Joaquin trains currently run on diesel power. Both lines should be converted to electric service once the San Pablo Emeryville Tunnel is open. Long distance Amtrak diesel trains would still follow the tracks around the Port of Oakland and stop at the above-ground Jack London Station at Howard Terminal. However, moving Capitol Corridor and San Joaquin trains underground would greatly improve pedestrian safety at Jack London Square.  Undergrounding would also allow the Amtrak trains to run all the way to a terminus in San Francisco.

The final phase of the ConnectOakland plan connects the 980 Transit Tunnel to the existing 19th Street BART station. This tunnel improves service between lines. Some 2nd Transbay Tube trains could be diverted to a new station at Broadway and 20th Street for transfers to the existing 19th Street station, so Green Line and Blue Line passengers could use the 2nd Transbay Tunnel while the first Transbay Tube is closed for repairs.

How to build it

A three-quarter mile tunnel would be built under an east-west street, possibly 20th or 21st streets to the Central Station under the existing Broadway BART tracks. Finally, this phase will also build tail tracks to allow storage and other operations. The tunnel and configuration will be built to be compatible with optional future extensions.

People coming from the southern and southeast portions of the East Bay  (e.g. Hayward, Pleasanton, and Milpitas) would take BART to the 19th Street Station. They would go to a new platform on the lower level to board the new rail line passing through 14th St, Jack London, Alameda Point, and other stations in San Francisco.

Even if 24-hour train service only used the new tunnel, someone ending work in San Francisco at 3am could take a train via the new crossing, passing through the Jack London and 14th St stations, and ending at 19th St station. From 19th street they could transfer to the Orange Line to get to their home near Union City station. 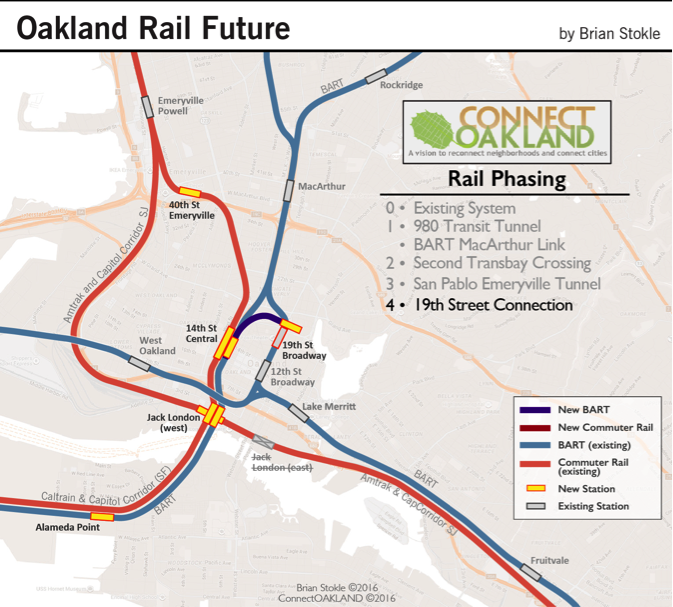 A system that works

The Bay Area could be build these all these phases over 15 years or 50 years. It’s up to us to decide if we want to see this vision to reality in our lifetimes and to figure out how to pay for it. The area will likely change between now and the completion of the project, the needs of transit will certainly change, and the design of phases will be developed will change in response. Using a phased vision makes putting a shovel to the ground much more likely, even if designs and details change and allows us to build the transit that we need when we need it.

2 thoughts on “How to Phase the ConnectOakland Vision”